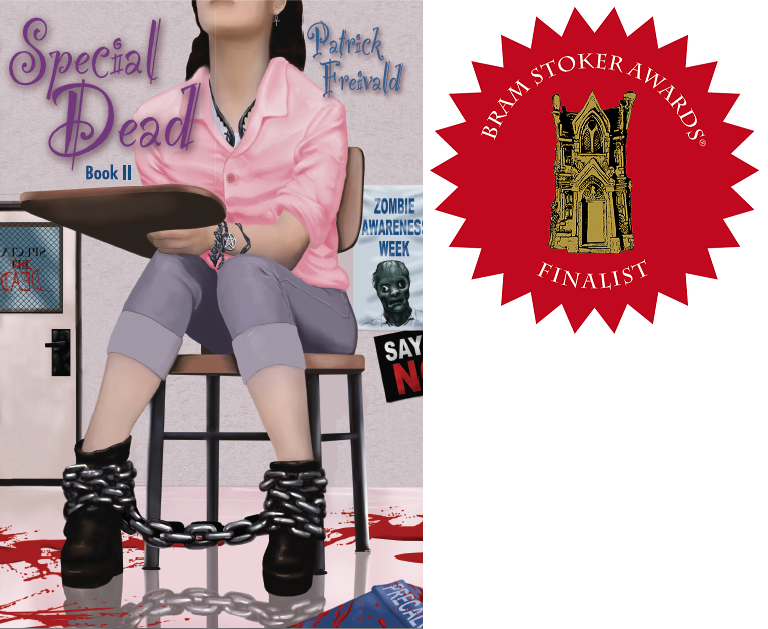 Ani Romero is back in the Bram Stoker Award®-nominated sequel to TWICE SHY.

Shackled to her desk, Ani Romero has a hard time concentrating on her studies. One of eight zombie survivors of the Prompocalypse, she’s back at school, but this time it’s no secret. Locked in their room, flamethrower-toting soldiers watching their every move, they’re tasked with homework and classes during the week, and macabre experiments on the weekend.

When the courts rule they’re not human, only an appeal keeps them alive long enough to discover a cure. College applications and SATs pale under the threat of incineration, and desperation turns them into lab rats… …but the scientists helping them have ulterior motives, and the promised cure destroys more than the virus.

Surviving high school has never been so hard.

“Freivald follows up his successful debut, Twice Shy (2012), with an equally enjoyable sequel. As in the first book, dark humor balances deftly with out-and-out horror, the mundane realities of undeath providing ample opportunity for both. Another fire-and-brimstone end sets up a third outing; fans will be slavering for it.” (Horror. 14 & up) —Kirkus Reviews

“Ani is back, and high school’s never been worse – or funnier. Think your high school sucked? Try manacles, guards armed with flamethrowers, and zombie classmates. I LOL’ed and gasped throughout Special Dead, an awesome sequel to Twice Shy.” —Lisa Morton, Bram Stoker Award®-winning author of The Castle of Los Angeles and The Halloween Encyclopedia.

“Ani returns in this highly anticipated sequel to Twice Shy. Patrick takes us back into her world, a world mostly confined to a school that’s being used to horde all of the undead.  However, things are not as they seem and as the reader progresses further into the story, the real truth behind this school of zombies is revealed. A powerful and engaging sequel that will have you fall in love with Ani  all over again. I truly enjoyed this.” —Charles Day, Bram Stoker Award®-nominated author of The Legend of the Pumpkin Thief, and The Hunt for the Ghoulish Bartender